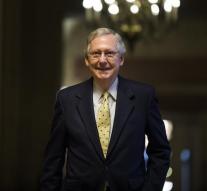 washington - The Republicans in the US Senate failed to dismantle the former President Barack Obama's care law. Several government officials have clearly not announced Tuesday to support the withdrawal of 'Obamacare' without an alternative available.

The withdrawal and replacement of the so-called Affordable Care Act has been a Republican spearhead for years. In the meanwhile, the party is checking both houses of parliament, but attempts to withdraw Obama's obsolete care laws and replace them with their own legislation has been extremely difficult.

The Republican Senate leader, Mitch McConnell, acknowledged Monday to insufficient support for the introduction of an alternative care system. Thereupon, he announced a short-term vote on the removal of Obamacare without opposing alternative legislation.

That plan was bad at several Republican senators. Shelley Moore Capito, Susan Collins and Lisa Murkowski clearly failed to support the proposal. This effectively pulled the plug from the entry plan, because the 52-seat Republicans have only a modest majority in the Senate.

President Trump responded to this news on Tuesday. He had called on Obabacare to first abolish and then work on a new system. The president immediately revealed a new plan: 'We will let Obamacare fail. Then the Democrats come to us, 'he said.