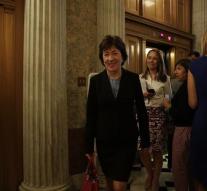 washington - The US Republicans appear to have insufficient support to restore Barack Obama's care reform. Republican senator Susan Collins turned Monday to a new bill that had to replace 'Obamacare' by another system.

Previously, her fellow John McCain and Rand Paul had already made no sense to support the new plan. Because the Republicans have a majority of two seats in the Senate, they could not afford to afford a third dilater. Collins made her reservations clear and said Monday could not support the bill.

The senator told reporters that the government has taken everything out of order to pull it over. 'The president called me today. The Vice President called me in Maine last weekend. Minister Price called me. The list of people who have not called me about this bill is probably shorter, 'she joked.