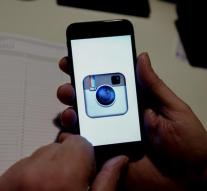 menlo park - Instagram has gone through the border of 700 million users. The newest 100 million users have been in record tempo, according to the Facebook daughter Wednesday.

Instagram greeted the 600 millionth user in December, and half the year before the 500 millionth user. Growth is probably due mainly to the new functions within Instagram. For example, last summer, Stories was introduced in which you can create a slideshow of pictures and videos. The app thus competes with Snapchat. Also, users can now create live videos and share photos that disappear.