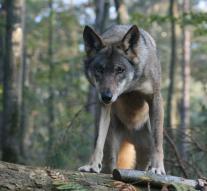 - The World Wildlife Fund (WWF) in Germany it was that wolves are slain illegally and makes 25,000 euros in prospect for the golden tip that leads to the shooter.

Last month shot dead wolf was again found in the woods near Görlitz in eastern Germany. Since 2009, eighteen have been slain. The wolf is a strictly protected species in Germany since 1989. In Germany are about 350 wolves around.

The killing of a wolf standing in Germany imprisonment of five years or a fine, but rarely run poachers caught. 'Germany has a poaching problem and still be perpetrators of such crimes almost never caught. That is incomprehensible, 'a spokesperson of the WWF.


According to WWF wolves are not only victims of illegal hunting parties but also other protected animals such as the lynx and various birds of prey. The organization believes that the local police, who have to address poaching, not enough knowledge to do so.