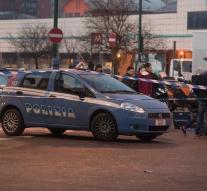 berlin - The 23-year-old Pakistani who was wrongly arrested Monday in connection with the attack in Berlin, had noticed police officers because he was in a hurry. told the newspaper Die Welt Navid B. he wanted to go to sleep and wanted to take the subway.

'I crossed the street racing, because cars drove up. Some agents saw me and kept me standing, 'said the Pakistani asylum seeker, which was identified previously in German media as Naved B.' They asked me why I ran. Because the cars, I said. When my subway was coming, but they held me. '

Die Welt published the full interview on the website.

Navid B. stayed in a refugee center at the former Tempelhof airport and wanted to go there go back to when he was arrested. Only after twenty hours it became clear that he had nothing to do with the terrorist act and he was released.

B. is a year in Germany. He says in the interview that he thinks the authorities will grant him asylum.