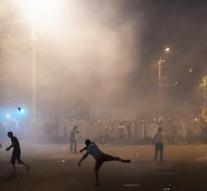 yerevan - At least fifty people, including 25 officers, were Wednesday night injured in riots at the police station in the Armenian capital Yerevan, where since Sunday is a hostage situation going on.

This has been reported to the Ministry of Health of Armenia. The police have made dozens of arrests.

Sunday the police station was stormed by gunmen in Yerevan, demanding that opposition leader Jirair Sefilyan is released. When the action was a policeman killed. Four others were injured. Four agents are held, including two police chiefs.