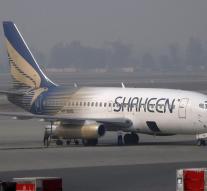 lahore - At least ten passengers were injured in an emergency landing of a plane in the Pakistani city of Lahore. It is a unit of the Pakistani airline Shaheen Air.

On board the aircraft would have existed more than a hundred people. During the landing at the Allama Iqbal airport would, according to the BBC some bands are folded which hit the plane on the runway. All passengers have since left the unit.

It is not yet known for some aircraft is involved.