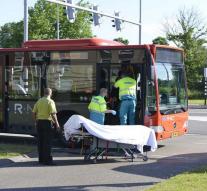 hoofddorp - In a packed bus Connexxion in Hoofddorp Thursday, five people were injured when the bus suddenly made an emergency stop.

The driver, who had the green light, had to brake for a motorist who ran a red light, said a spokesman of Connexxion.

The injured have been checked by ambulance staff. They had mostly bumps and scrapes.

Here Bassie wants a fortune for it!


The driver failed to stop.