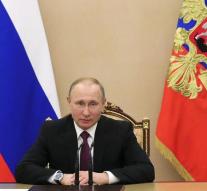 Soerkov exercises enormous influence through its deputies in eastern Ukraine. He would have played a key role in the appointment of Aleksandr Zachartsjenko as the foreman of the People's Republic of Donetsk. After the former electrician in Moscow visited Soerkov, he was suddenly pushed forward as a new leader.

The former rebel leaders open a booklet about the influence of the Kremlin, as they say they feel that their insurgency has been hijacked by Moscow. The leaders appointed by Russia would not always act in the interests of the region. Most separatists of the first hour would have gone under pressure in the meantime.

'Every call from Moscow was seen as a call from the office of God himself. Instructions were taken immediately, 'said a former rebel leader. Two other sources confirmed that reading. The Kremlin did not respond to a request for an explanation. The Ukrainian government refused to comment.