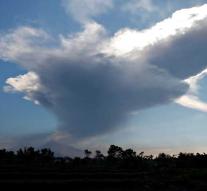 jakarta - The Indonesian authorities have ordered people who live near the Merapi volcano to leave their homes because a dangerous eruption has to be taken into account. The almost 3000 meters high mountain on the densely populated island of Java emits ash and steam. The airport of Yogyakarta is closed as a precaution.

The emergency response service advised the population in a radius of 5 kilometers around the Merapi to find a good place to go. A spokesman said on Friday that 120 tourists who made a trek on the mountain were brought to safety. The highest state of preparedness has not yet been declared in the region.

The Merapi is one of the most active volcanoes in Indonesia. In 2010 more than 350 people died due to an eruption.