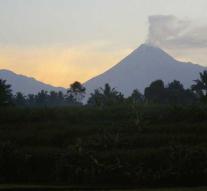 jakarta - The volcano Marapi on the Indonesian island of Sumatra has erupted. This happened after a few days of higher activity was registered with the mountain in Central Java. According to the authorities, there is no danger to the population.

The 2885-meter-high volcano spits ash up to four kilometers high. In 1979, for the last time, people were killed by an eruption of the Marapi. Then sixty people died. There are about 130 active volcanoes in Indonesia that belong to the so-called Pacific Ring of Fire.