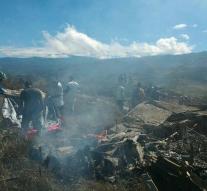 jakarta - A cargo aircraft of the Indonesian Air Force crashed in a mountainous area, in which all 13 passengers and crew were killed. According to a spokesman of the rescue unit crashed the plane crashed during a training exercise in the remote region of Papua, the easternmost province of Indonesia.

The C130 Hercules had taken off from the town of Timika and Wamena had as a final destination. It crashed on the way up the mountain Lisuwa.

Meanwhile, the plane has been found. The bodies of the victims are recovered and taken to Wamena.

Cargo planes are widely used in the remote and mountainous region of Papua for transportation of people, because land travel is often impossible.

Indonesia has a bad name in the field of aviation safety. President Joko Widodo promised last year to examine the increasingly aging aircraft fleet. He made this promise after a military transport plane crashed, killing more than 100 deaths.