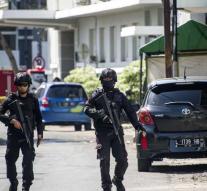 jakarta - The Indonesian parliament has unanimously tightened up the legislation against terrorism. The stricter action against people suspected of terrorism is also prompted by recent attacks in which families in the east of Java blew themselves up. The terrorist movement Islamic State would be behind these suicide attacks.

The parliament has been busy with new legislation since the beginning of 2016, but the attacks on Java have made it almost impossible. People who are suspected of involvement in terrorism can be held in pre-trial detention much longer. They can be held for fourteen days without charge, according to the Jakarta Post. Once an indictment has been made, they can be detained for another two hundred days.

In addition, the parliament created the legal framework for a larger role for the army in the fight against terrorism. A special organization of the military intelligence service has been set up for this purpose.