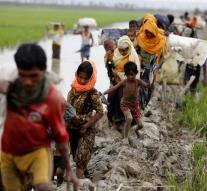 The last weeks have already been around 90,000. Rohingya fled from Myanmar to neighboring Bangladesh, in Myanmar, they have hardly any rights as minorities. Later this week, the Foreign Minister of Indonesia travels to Myanmar to discuss a proposal on how Indonesia can help the Rohingya.

Indonesia is being protested at the embassy of Myanmar. The protesters find that the Indonesian government must take a lot of harder opposition to Myanmar. Indonesia has a large Muslim population and has long been for a special Rohingya state in Myanmar.

In Myanmar, about 1 million people live in Rohingya. It is Muslims who are not recognized as citizens in the predominantly Buddhist Myanmar.