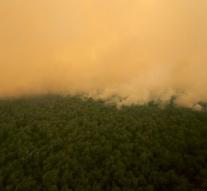 jakarta - Indonesia makes six warships and two ferries ready to thousands of children and the elderly who suffer from the smoke to evacuate forest fires in Sumatra and Kalimantan. That the authorities in Jakarta Friday.

Large parts of Southeast Asia have for weeks suffered from the smoke blanketing the area. Despite protests from countries like Malaysia and Singapore, Indonesia still not been able to fight fires effectively.

Air pollution is so strong, that schools in the area have repeatedly shut and commuters are encouraged as much as possible to work at home. In Singapore, the pollution reached Friday " very high " state.