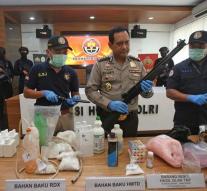 jakarta - The Indonesian police have arrested a Muslim extremist who was in possession of a large amount of material to make bombs. The 23-year-old Rio Priatna Wibawa would plan was thus to carry out attacks on government buildings and the embassy of Myanmar.

Students agriculture was earlier this week arrested at his home in Majalengka in West Java. According to local media, the explosives were enough for a bomb that was twice as powerful as that of the attacks on Bali in 2002 that cost 202 people to life.

Making the authorities in Indonesia are concerned about a renewed wave of radicalization. The country has the largest Muslim population in the world, of whom several hundred sympathize with the terrorist group Islamic State. In Muslim countries such as Indonesia and Malaysia also rules anger over the bloody actions of the army in Myanmar against the Rohingya, a Muslim minority.