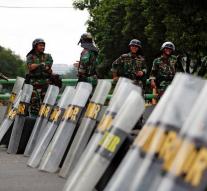 jakarta - The Indonesian police on Friday arrested five people ahead of a protest by thousands of Muslims demanding the resignation of the Christian governor of Jakarta. Among those arrested, suspected of treason, is the leader of a fanatical Muslim group.

Religious and political tensions rise ahead of the second and final round of governor elections on 19 April. Basuki Tjahaja Purnama, short Ahok, takes it up against a Muslim candidate.

A group of conservative Muslims opposes since the appointment of Ahok already against him in 2014. Ahok will in turn nonsense that Muslims are not allowed on non-Muslim votes and quoted from the Koran to make his point. This led to protests and a lawsuit against him for blasphemy.

Now the arrested leader of the Islamic People's Forum (FUI) had organized the demonstration Friday. The police would have been plans to occupy the Indonesian parliament. Jakarta apply plenty of security.