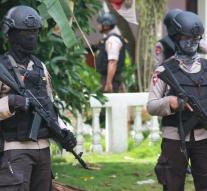 jakarta - The Indonesian police by shooting dead three terror suspects in their own words prevent an attack that would take place soon. Agents from a special anti-terrorist unit Wednesday attacked a house in South Tangerang, a suburb of the capital Jakarta. It came to a gunfight.

According to police, the suspects threw a bomb from the house, which did not explode, and they shot at the agents. A person is alive arrested. The house felt the officers then five bombs.

The militants are adherents of the extremist ideology of Islamic State, suspecting the authorities. In recent weeks, the Indonesian police have arrested more terror suspects. Thus, fourteen suspected militants were interrogated about plans to attack the presidential palace in Jakarta. They would have included plans for women to blow themselves up.

In the largest Muslim country in the world the authorities are increasingly concerned religiously motivated extremism.