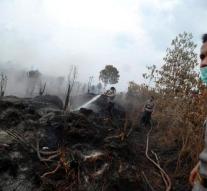 - "The forest fires that ravaged Indonesia for months last year, believed to have more than 100,000 people killed. This is mainly due to the inhalation of fine dust, which contained large amounts of carbon."

"Researchers at the US universities Harvard and Columbia say that not only people of Indonesia affected by the particulate matter were. Even residents of neighboring countries such as Malaysia and Singapore have died from the contaminated air. The researchers described their findings in the journal Environmental Research Letters."