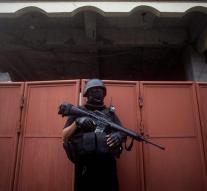 tarakan - Indonesia is setting fighters to prevent jihadists from ISI from the south to flee to the south. Three combat devices are stationed for a month on an air force base in Tarakan (North Kalimantan).

The Indonesian authorities fear the arrival of the jihadists who have occupied parts of the Philippine city of Marawi. The Filipino army warned Friday that some warriors have acted as refugees to escape the fights in the city.

Marawi is located on the island of Mindanao, located north of Indonesia. In Jakarta, developments around the city war are closely monitored. 'The warriors may flee from the Philippines and may then be forced to cross the border with Indonesia,' said a military officer at the press office Antara.

The Indonesian authorities have also asked the people to keep an eye on them. Among other things, fishermen received the request to alarm when they saw suspicious figures. Furthermore, a special police unit was sent north of Celebes to prevent jihadists from crossing the border.