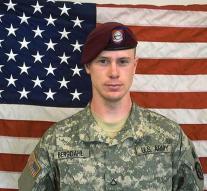 - The charges of desertion against Bowe Bergdahl, the American soldier for five years in Afghanistan was held captive by the Taliban and exchanged for captured Taliban is Monday for trial referred to a court-martial.

The 29-year-old Bergdahl left his post in 2009 in Afghanistan and was captured by the Taliban, who traded him after five years at five imprisoned Taliban figures. Meanwhile, the sergeant in the US a long prison sentence hangs over the head because of desertion and misconduct.The date of the arraignment at Fort Bragg, North Carolina, will be announced at a later date. Prosecutors said during a preparatory meeting on the military post in San Antonio that there was sufficient evidence to hold Bergdahl for trial on charges of desertion and misconduct.
NEW