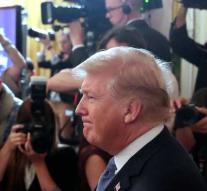 washington - Seventeen American states are taking the Trump government to court because they want to put an end to separating immigrants from their children. The states call this policy 'cruel and unlawful.' They demand that the children be reunited with their parents.

The complaint was filed with a court in Seattle. Trump came under fire for his immigration policy, where illegal immigrants were separated from their children. Under pressure from the criticism, Trump put an end to the controversial policy last week. The seventeen states are not impressed. They call the presidential decree 'misleading. '

Among the seventeen states are Washington, California and New York.