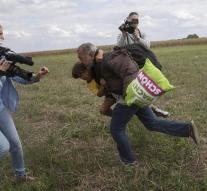 budapest - Petra László, Hungarian camera woman who caused a stir last September because they are refugees, including a child, tackled, is being sued by the Hungarian Public Prosecution for its misdeeds. This was announced by the Hungarian authorities Wednesday.

László, who lost her job after her remarkable action, offered earlier in an open letter to the Hungarian newspaper apologizes. She said at the time that she was so shocked by the incident that she could not respond earlier. The letter emphasized László not 'callous racist' be kicking children, but they reacted out of fear.

The case against László coincides with a referendum in the country on the EU-immigrant quota. The Member States last year undertook a total record 160. 000 refugees from among others the 'frontline states' Greece and Italy. Hungary is disagreed and referred the matter to the European Court of Justice. The referendum will take place on 2 October.