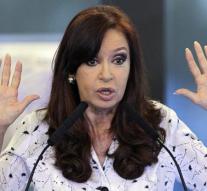 buenos aires - The former president of Argentina, Cristina Fernández de Kirchner, is being prosecuted for serious crimes around corruption and other abuse of public office. This has a right stipulated in the South American country.

Argentine media reported Tuesday that the 63-year-old Fernández de Kirchner must answer along with eleven others to court for ' an illegal conspiracy that fraudulently administration proposed objective. ' The criminal investigation focuses on possible illegal grant by its government procurement to certain operators.

Fernández de Kirchner in 2007 succeeded her husband, Néstor Kirchner (1950-2010) as president of the country and ruled until the end of 2015. Both have been leaders of the radical wing of the leftist-nationalist Peronist movement.