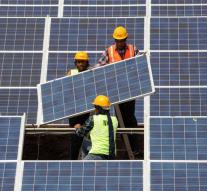 - The world's largest solar power plant in the world is found in India. On a flat of 10 square kilometers in the state of Tamil Nadu are placed 2.5 million solar panels. The maximum capacity of the new plant is 648 megawatts, reported news station Al Jazeera on Tuesday. That's enough to provide hundreds of thousands of households.

The plant occupies first place on the Topaz Solar Farm in California, which has a capacity of 550 megawatts. The Indian project cost converted about 640 million euros and was thrown up in eight months time. India has big ambitions with solar energy. The government will provide 60 million households with solar electricity over six years.

Environmental organizations hope that will finally improve air quality with a sustainable energy supply. Currently, there is still not notice: New Delhi population was earlier this month still burdened by the worst smog in seventeen years.

An automated system, including solar energy, maintains the panels of the world's largest solar power plant every day clean.