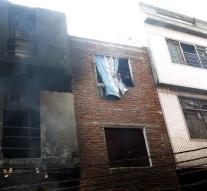 - In a fire at a leather factory in the outskirts of the Indian capital New Delhi were killed Friday thirteen workers. They were lying on floors above the shop to sleep when the fire broke out, presumably by a short circuit.

Sixteen workers were rescued. Most had burns and respiratory problems to a hospital.

Police are investigating whether the factory was illegal. The factory was located in a densely populated neighborhood with narrow streets. According Carin Leffler of the Clean Clothes Campaign brings the fire back the dangerous working conditions in the garment industry in South Asia in the spotlight. ' These people were killed because they slept in the factory. ''