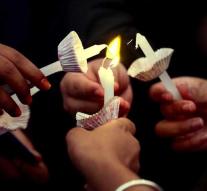 delhi - The Indian police have arrested several suspects after a teenager was kidnapped, raped and later set on fire. The alleged rapist and his accomplices also mistreated the sixteen-year-old girl's parents, reports Indian media. The authorities report that up to now 14 people have been arrested.

The teenager was kidnapped and abused last week in a village in Jharkhand state. Then her family moved to the village elders, who decided to impose a fine on the offender appointed by the girl. He then went through the ribbon, said the victim's father according to the Hindustan Times newspaper. 'The accused and his men became furious and started to beat us up. We ran away to save our lives. '

The father told the burned body of his daughter about half an hour later to have found in their home. The premier of the state called the incident 'barbaric. 'He ordered the authorities to pick up the perpetrators. The victim's family is now being protected, the police say.