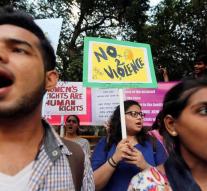 - An Indian student of twenty-three years after she was raped by five men this week again raped, allegedly by the same men. The offenders were released on bail.

The men wait for the woman to the university, drugged her and raped her in a car. They left her for dead afterwards. Possibly men wanted to take the revenge because the woman her accusations of rapists not retracted during the trial, the Washington Post reports.

The men come from a higher caste than the victim. It is customary in such cases are not reported rape. It often happens that wealthier offenders a case surrenders to them. The woman's family would, however, have refused compensation from the men, leaving the men still ended up in jail. The woman's brother said that the reason for the second rape.


Women are very insecure in India and regulated victim of rape or abuse. According to a report from the World Economic Forum on the difference in position between men and women, India, this year on the 108th place from 145 countries. Last year was the 114th place. Indian women therefore soon get a special button on their mobile phone that they can press in case of emergency. Both new and existing phones are equipped with the panic button.