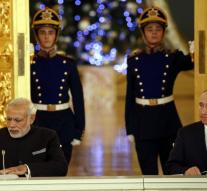 Modi 'shop' in Moscow and is particularly interested in nuclear technology and weaponry. Both powers call their collaboration a strategic partnership .

Modi would be many billions Russian weaponry and want to take an interest in the advanced Russian air defense systems S-400 missiles. India would like to start with five converted for 4.1 billion euros.

Modi's government plans to modernize many aspects outdated and poorly equipped armed forces for around 140 billion euros. Modi said he also therefore wants to expand relations with Russia beyond the usual sector of oil and gas. It should sound like music to the ears Putin because Russia is economically bad for it.