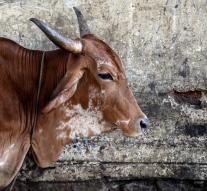 - An angry mob on Friday in a town in India a Muslim beaten to death. The man was with four other Muslims fifteen oxen and cows in a truck to have to smuggle another state. That the police reported Friday .

The five men were injured and taken to a hospital, where one of them later died.

The four survivors were arrested for animal cruelty. The cow is sacred and untouchable for the Hindu majority in India. Over 80 percent of the approximately 1.2 billion population of India is Hindu.

Muslims constitute 180 million , the largest minority in the country.