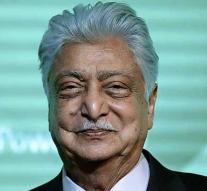 new delhi - According to CNN, the wealthy Indian Azim Premji is donating 530 billion Indian rupees to charities. That is around 7 billion euros. Never before in India did one person give away so much money at once…

The 73-year-old Premji is the chairman of the technology company Wipro. He was the first man from India to sign the so-called Giving Pledge, a campaign by the billionaires Bill Gates and Warren Buffett to call on the richest people in the world to give away most of their assets to charities.

The foundation of Azim Premji is committed to education and manages the university in Bangalore.