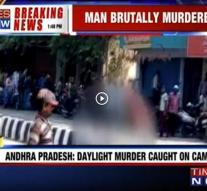 kadapa - In India there is a fuss about a bloody murder in a busy street in the city of Proddatur. Two men pulled the victim, 32-year-old Maruti Reddy, on a bright day off a tuktuk and attacked him with a machete. According to The Times of India, reporters did not intervene but filmed the murder with their mobile phones.

The victim drove to a court on Thursday when he was arrested suddenly. One of the attackers pushed the man to the ground, after which a handkerchief caught him with him for a few minutes. Soon on the internet, images of the lugubre incident occurred, resulting in many angry reactions.

The perpetrators would have reported themselves to the police after the murder. Who knew that the motive was probably in the relational atmosphere, the newspaper reported Friday.