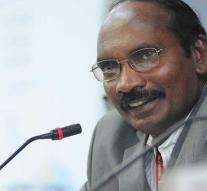 new delhi - India wants to bring a person into space in a few years. The country hopes to bring three crew members into orbit around the earth by 2022. They would have to stay there for five to seven days at an altitude of 300 to 400 kilometers.

If successful, India is the fourth country that can take people to space. Until now only Russia, the United States and China were able to do so.

India wants to cooperate with 'friendly countries with advanced space programs. 'The country thinks it needs 100 billion rupees for such a mission, about 1.2 billion euros. That would be considerably cheaper than the manned flights from other countries. Previously, India managed to bring a dirt-cheap satellite to Mars.