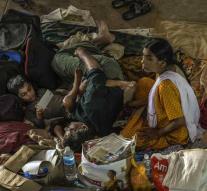 new delhi - India does not need financial support from foreign governments after the flood in Kerala. It is a policy to finance reconstruction after such disasters through 'domestic efforts', the Indian Ministry of Foreign Affairs said after several countries had offered help.

The southern state of Kerala suffered heavy rain this month, resulting in flooding. There were hundreds of deaths. Many thousands of houses have also been destroyed, as are bridges and roads. The damage is probably in the billions.

The United Arab Emirates (UAE) provided EUR 86 million in financial assistance after the disaster and another EUR 4.3 million to Qatar. Many residents of Kerala live and work in Gulf States. The government of Indian Prime Minister Narendra Modi has so far pledged 6 billion rupees (74 million euros), far less than what Kerala asked for.

Kerala's Minister of Finance responded disappointed to the government's decision. He stated that his state should be compensated for refusing foreign aid.