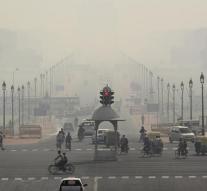 berlin - India adheres to the climate treaty of Paris, even if the United States withdraws from the agreement. That said Indian Prime Minister Narendra Modi in Berlin against German Chancellor Angela Merkel, said a source within the delegation.

US President Donald Trump has been considering making a point for his country's participation in the climate pact in 2015. He was thus isolated at the G7 summit in Sicily at the point of climate policy. Trump soon informed the matter about the issue.