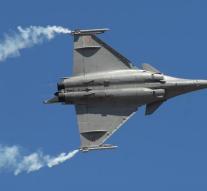 - India has ordered for 8 billion-36 Rafale fighter-bombers in France. The contracts were Friday in New Delhi signed by the defense ministers Manohar Parrikar and Jean-Yves Le Drian, confirmed the Indian Ministry and the French aircraft manufacturer Dassault.

The purchase is part of an extensive modernization campaign for the Indian armed forces, including the purchase of submarines and artillery. The Air Force used largely obsolete fighter aircraft of Soviet manufacture, which India potential threats from Pakistan and China can hardly cope.

Originally wanted to buy 126 Rafales India. Why are only 36 pieces are purchased, New Delhi has not explained.