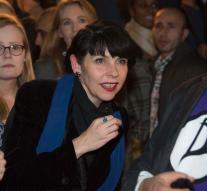 - The ruling Independent Party continues after the elections of Saturday the largest party in Iceland. the Pirate Party expected profits failed to materialize, although the party did get more votes than in previous elections. This is evident from the results that Icelandic media reported on Sunday.

The Independent Party got 29 percent of the vote, good for 21 seats in the 63 seat parliament. That's a gain of two places. The Progressive Party, coalition party in the current government, lost eleven seats and arrived at eight.

The ruling parties lose their majority. Due to the further distribution of the votes to form a coalition seems to be difficult. The parties cooperating in the Pirates Coalition ie do not exceed together 27 seats.

The largest party in which cooperation is the Left-Green Movement who was behind 15 percent of voters and thus may claim ten seats. The Pirate Party was stabbing at 14.5 percent of the vote, also good for ten seats. The two other parties Bright Future and Social Democratic Alliance came up four and three seats respectively.

A key result seems reserved for the new party Regeneration. Which holds 10.5 percent of the votes and thus has seven places in parliament.