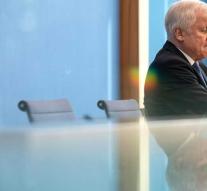 munich - After the heavy defeat of the CSU at the state election in Bavaria, the pressure on 69-year-old party leader Horst Seehofer has increased considerably. Two district administrations demanded the resignation of the former prime minister of Bavaria. The Oberbayern department, the largest in the German federal state, wants an extraordinary party day to be held this year.

Seehofer, currently Minister of the Interior in the Merkel government, was not opposed to that initiative on Tuesday in Berlin. According to him, such a special gathering is probably the best instrument the CSU has. Decisions can be made about the consequences of the ballot box failure, including the question of the responsible persons. 'In any case, I am prepared to discuss this issue. '

Markus Söder, who was once again nominated as prime minister of the Land by the shrunken CSU group, said a party day to find a good idea. The CSU, which has been operating for decades, lost the absolute majority in Bavaria.