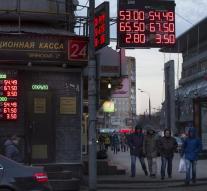 moscow - The real income of the Russians decreases rapidly. According to official statistics circulated Monday that income declined an average of 11.5 percent in May compared-April. Taken over a year fell 5.7 percent in real income according to statistics from Rosstat.

The contraction in retail trade dropped further in May. Compared with a year earlier, the volume of trade has converted 31 billion worth less. The Russian economy has been hit hard by lower oil prices and Western sanctions. In 2015, the economy shrank 3.7 percent in the first three months of 2016 was 1.4 percent, according to figures from the Russian Ministry of Economic Development.

The crisis has forced many Russians to drastic cuts. In a Monday by the Moscow Times cited poll by Romir research suggested 43 percent of respondents said they were forced to spend less money over the last twelve months of food.