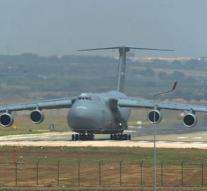 - The Turkish authorities have the Incirlik air base, which provides, among other US warplanes stationed Sunday reopened. This was announced by the Pentagon. The military operations are resumed from the air against Islamic State in Syria and Iraq.

The electricity supply is still closed. The troops stationed at Incirlik make do with emergency generators.