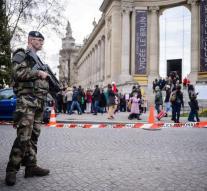 - Around the turn of the year in France more than 100,000 police officers on the leg. The Minister of Internal Affairs Bernard Cazeneuve said Thursday. The added security is primarily a response to a potential threat of attacks by extremists. The New Year comes around, moreover sometimes to riots in some neighborhoods of major French cities.

Security measures have been tightened in many European cities because of fears that extremists strike. In November, 130 were killed and hundreds wounded in attacks in Paris. In Brussels, a large fireworks display and other celebrations canceled for security reasons. In Moscow's Red Square this year is not the place for Muscovites to usher in the new year. The square is closed, possibly for security reasons.