Home / World / In Colombia, the area as big as Limburg is full of coca cultivation 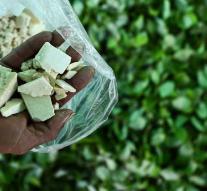 bogota - The area in Colombia where coca plants are grown has never been so great. According to a report published by the United Nations on Wednesday), the area in the South American country grew by 17 percent in 2017 to 2,170 square kilometers, which is approximately the area of ​​the Dutch province of Limburg. This corresponds to a potential coca leaf harvest from which almost 1400 tonnes of cocaine can be extracted.

Colombia remains the largest cocaine producer in the world, for Peru and Bolivia. The market value of this amount of drugs in Colombia is 2.3 billion euros. Cultivation is concentrated in the border areas with Venezuela and Ecuador, where former members of the dissolved FARC guerrillas are active in the drug trade. In 2017, Colombian security forces seized a total of 435 tons of cocaine.