Home / World / In an instant boiling 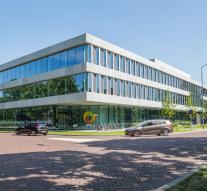 - It is possible to make minute particles in an instant extremely warm. When laser beams in a certain way are fired up atomic nuclei, which can reach a temperature of ten million degrees within a few billionths of a millionth of a second. This is about as hot as the core of the sun.

The technique was discovered by British scientists and state Friday in the major science journal Nature Communications. " If their theory is correct, and I believe it, that would be pretty terrible and good. The second question is : can you then apply it in practice? That depends on a lot of factors ", said Marco de Baar, professor at the Technical University of Eindhoven and head of nuclear fusion research at the Dutch institute for fundamental energy (DIFFER).

Warming up of the particles is done in order to excite nuclear power. De Baar : " You're trying to make nuclear fuel with icicle implode. Very strong lasers shooting from all sides on the sphere. The big problem is that there is turbulence on the edge of the sphere. " Turbulence makes the process less efficient. " It acts as a leak, it all throws matter out. Matter and energy are lost. " The British hope their technique nuclear fuel is less turbulent, more efficient. " As yet I really need to be convinced of experiments ", says De Baar.