Home / World / In 2 weeks Trump will decide on climate agreement 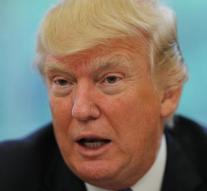 washington - US President Donald Trump believes that the United States is being treated unfairly in the Paris climate agreement. He will arrive in about two weeks with a decision whether the US will continue to support the agreement.

Trump said Thursday in an interview with Reuters press office that countries like China, India and Russia put too little money to help smaller countries help climate change. That, while the US claims to tremble enormously. 'We want to be treated honestly,' he says.

During his election campaign, Trump had declared that he would abandon US support to the agreement. According to the president, the abolition of the 'green rules' will boost the production of oil, gas and coal and generate thousands of jobs.