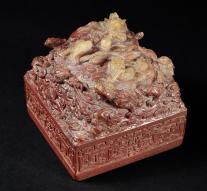 paris - A richly decorated imperial jade seal of the eighteenth century on Wednesday raised at an auction in Paris 21 million. An unknown Chinese collector bought the rare object from the time of Emperor Qianlong (1736-1795).

The experts of the French auction house Drouot had estimated its value at 500 000, but the price was flying through the great interest up. The hammer fell after only fifteen minutes.