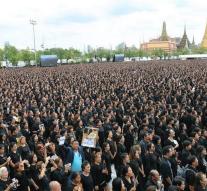 bangkok - A huge crowd has gathered Saturday for Palace in the Thai capital Bangkok to mourn the deceased King Bhumibol last week. The estimated 150,000 Thai sang the national anthem in memory of the king, who died at the age of 88 after seventy years on the throne.

The black-clad people came from near and far to Sanam Luang, an open space where royal cremations took place in the past.

The Thai government has declared a year of mourning. The singing of the national anthem was filmed and will be shown in cinemas before the main film begins.