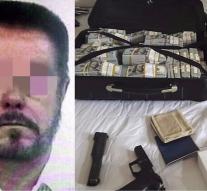 sorriso - The Brazilian police arrested one of South America's biggest drug traffickers. It's about drug boss Luiz Carlos da Rocha, who had been in flight for the police for thirty years. He used to use plastic surgery to remain in charge of the agents and used different identities.

Da Rocha has to be sentenced to more than 50 years in prison, writing local media Saturday. According to the police, Da Rocha lived outside the spotlight, under the name of Vitor Luiz de Moraes. Agents compared pictures of De Moraes to those of the drug boss and concluded that it had to be the same man.

With his drug empire Da Rocha produced cocaine in Bolivia, Peru and Colombia, after which the drugs were transported to Europe and the United States via a complicated logistics system.

He would have earned 100 million dollars (87 million euros) with his trade, the police are trying to recover their money and assets.