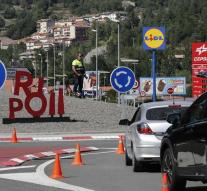 vilvoorde - The imam from the Spanish town of Ripoll, possibly involved in the attacks in Barcelona and Cambrils, stayed for some time in Vilvoorde. That states the mayor of the city, near Brussels.

According to Bonte, 'Abdelbaki Es Satty' was, in particular, from January to March last year 'in the Brussels periphery.

The Spanish police believe that the iman was in charge of the radicalization of the young perpetrators. He may have died at the explosion in the Alcanar house.

Spanish media wrote Sunday that the iman has stayed in Vilvoorde and in the village of Diegem in recent years.

The Belgian State Secretary for Asylum and Migration says that the iman is not known to the Aliens Office. He has therefore never applied for or obtained a Belgian residence card.