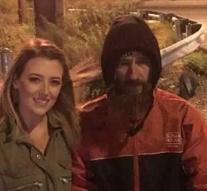 philadelphia - A couple from New Jersey must hand in part of the huge amount they have collected for a 35-year-old homeless. The homeless person got a pittance of the $ 400,000 that came in via GoFundMe, while the couple made countless trips and bought a brand new car.

Johnny Bobbitt had twenty dollars last November when he met Kate McClure (24). She no longer had gasoline and was on the side of the road. Thanks to the helpful homeless, she could continue her way. She was very grateful to him and wanted to do something for him.

Together with her friend Mark D'Amico (39) she started a crowdfunding campaign. That yielded a lot more than expected. More than 14,000 people made money, totaling some 400,000 dollars. More than half of the money was spent, not by the homeless, but by the traveling couple. The man- who is already sleeping under the bridge- dragged the couple to court.

The judge ruled Thursday that the rest of the money must be surrendered. The money will remain on an account until the case has been settled. The two have to indicate in detail what happened to the money, according to NBC. Of the huge amount, only $ 150,000 would be left.