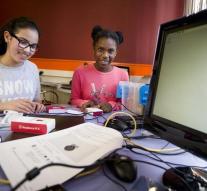 For example, programming knowledge is very important for today's youth, says the president of entrepreneurs dome VNO-NCW. 'In these times of digitization and robotics, this is essential to come along later,' he said at a meeting with industry association ICT Netherlands. 'If we want to remain competitive and continue to provide people perspective, you have ICT knowledge regardless of what you want later.'

It would also, according to De Boer more attention to computers and digital communications should be put in for education. And it is important that the MBO and HBO cooperate closely with business to educate according to the latest insights as potential employees, he said.


De Boer already walked with his comments ahead of the upcoming parliamentary elections next year. He believes it is also important that digitization over now be placed at the heart of government policy.